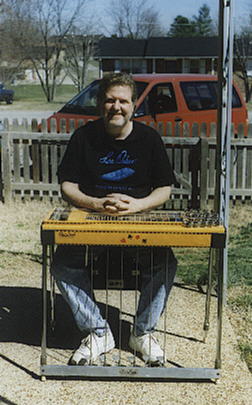 Well, I know this took entirely too long, and I apologize. Things are kinda hectic here from time to time, with seven kids and work and all.

I’ve enclosed two photos, one of just Blondie, and one with me sitting behind her. Feel free to do whatever you’d like with them.

I guess I should tell you a little about myself, if you want to include anything along with the photo on the web. I traveled with Tammy Wynette from 1980-87, and have been recording since 1974. I’ve recorded with a lot of acts in both the country and gospel industries. Alabama, Tammy & George, Vern Gosdin, Barbara Fairchild, Keith Whitley… and others.

Let me tell you about Blondie. She was built in 1965, best as we can tell. Duane Marrs worked on her for me, and he said he believed he built her; said he could recognize his drill press work anywhere. Because of the material used on the tuning collars underneath, he guesses she dates back to 1965. After that, Sho-Bud changed the material over to brass, and this was built before the brass fittings. She’s in excellent shape, original except for a few of the tuning keys and the new knee lever that Duane had to hang under there for me. The pedal setup is as follows:

Nothing terribly odd in the setup, I suppose. Sometimes, I tune the 9th string open to Eb instead of D. I do that when I know I’ll be needing that note quite a bit on a song and I don’t want to hit the knee to get it. All the little tuning idiosyncrasies that have been corrected in the past 30 years are still part of life with Blondie, and the drop doesn’t always return to pitch. My own funky way of compromising, I suppose.

As far as sound processing goes; well, I’ve kinda gone back to basics lately. Guitar, cord and amp. It’s different, I guess; people seem to be liking it. I know I do. The amp is an old Session 500 (with wheels, thank God!). Lately, most engineers have been sticking just a plain old SM57 in front of the amp, and off we go. A few days ago, one had an old RCA ribbon mike that he hung on me; it sounded wonderful.

Well, Bob, I guess I’ve rattled on long enough. Drop me a line if you need any more info; I’ll try to help with what I can. And thanks for taking the time and interest. 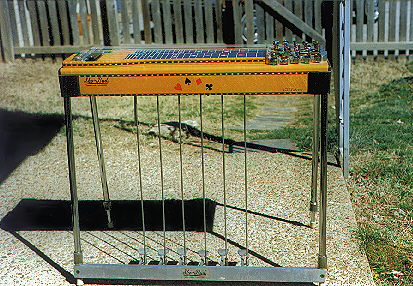 Editor’s note — Back in the sixties, Sho-Bud made some double neck instruments with “cross-over linkage”. On these guitars, the player threw a mechanical lever to change which neck was activated by the pedals. Neat idea, huh? I sent Micheal e-mail asking if Blondie had the cross-over linkage, and how he tuned his rear neck. This was his reply:

I was just changing strings on “Blondie,” and thought I’d see if I had any mail, and here you are. To answer your question: yes, she does have the cross-over machinery underneath. However, I’m not a “6th” player, and I have the linkage disconnected. It would throw it out of tune, I’m afraid, if it flipped to the other neck.

I do have a tuning, non-pedal, that I’m messing with back there. I’ve just been experimenting with it a little, and don’t really feel comfortable with it yet, but it shows promise; especially with rock & roll, and slide guitar type stuff. It’s like this, low to high: E (same as 6th string on a straight guitar), G, B, D, E, G, B, D, F#, E. I guess you could call it an Emin 9th, or something like that. It really gives great power chords with distortion; I think it might be pretty cool with a Match-Bro, too, for the dobro thing. I’ll let you know. Do you know if anybody has ever used a similar tuning?

I don’t, but it sure looks interesting!