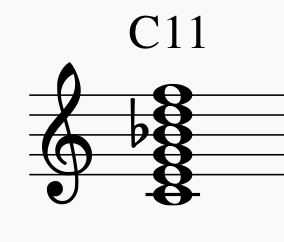 The spelling for an 11th chord is this:

Look familiar?  It should.  Bb D F is a Bb major chord.

An 11th chord is a major chord with another major chord, named 1 step lower, on top of it.  You could call a C11 “Bb over C” and a lot of musicians would understand that. I don’t know how this relates to guitar (I never learned 11ths on guitar), but it’s pretty interesting, don’t you think? Partials that work for a C11 are: Look at the notes as a 6-note scale: C D E F G Bb C.  The only thing you have to watch out for in arranging an 11th chord is that you don’t place the 3rd (E) and 11th (F) in the same octave. Other than that, any combination of those notes can work as a partial of the chord for comping purposes.

Also remember that it’s a dominant chord – meaning it has a b7 and resolves to a 4th above.  So C11 in our example will usually be followed by an F of some sort, and a G11 (F over G) would resolve to a C.  If the 11th chord doesn’t resolve up a 4th, it’s a clue that your chart might be wrong.  If a C11 is resolving to A or Am, for example, it’s probably a Em7b5.  This makes little difference on guitar, but it drives bass players crazy because C is the wrong bass note.