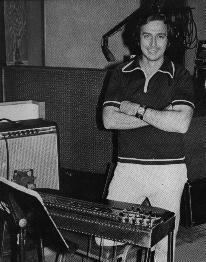 Lloyd Green solidified the “Nashville Sound” of the pedal steel in the sixties and seventies. In 1975, Tom Bradshaw wrote of him: “Today, one cannot listen to a Country radio station for 20 minutes and not hear Lloyd playing on some record.”

Lloyd Green’s tuning, as published in Winnie Winston’s 1975 book Pedal Steel Guitar, is interesting for what it leaves out of the “standard” Nashville tuning:

The most unusual feature here is the lack of a lower for the 4th string. It would be expected on Right Knee Right – the standard change is to lower both E’s to get a B6th chord. This doesn’t keep Lloyd from getting that “Old Hank” sound when the song requires it, though. I can only assume that he uses his second string a lot more than most of us do in that kind of music.

Lloyd Green also popularized the “arm rest” body style for pedal steels. A single neck steel is built on a double neck body, and the space where the rear neck goes is padded for comfort. Sho-Bud marketed an endorsed model built like this with a green finish as the LDG or Lloyd Green model.